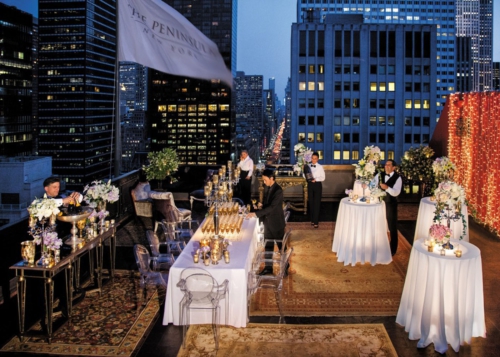 “Celebrate with Us” promotion offers a complimentary bottle of Champagne to guests who book a stay from now through December 30, 2012
The Peninsula New York is pleased to announce they have been awarded the “#1 Hotel in New York City” distinction in the 2012 Conde Nast Traveler Readers’ Choice Awards, featured in the November issue. As a special thank you, the hotel is debuting the “Celebrate with Us” promotion, which offers a complimentary bottle of Champagne to guests who book a stay at the hotel from October 18 – December 30, 2012, using the promotional code “CNT2012” via http://www.peninsula.com/newyork.
The Peninsula New York achieved an impressive overall score of 95.4 in this year’s Readers’ Choice Awards, which was compiled based on scores from criteria including food/dining, location, overall design, rooms, and service. In October, Conde Nast Traveler also announced their annual Business Travel Awards Readers’ Poll where The Peninsula New York earned the “Best Business Hotel in New York” accolade with an overall score of 96.2 for top ratings in the categories of rooms, service and business facilities.

The Forbes Five Star and AAA Five Diamond Peninsula New York is ideally located on Fifth Avenue and 55th Street, in the heart of New York City’s most prestigious shopping, cultural, and business neighborhood, in Mid-town Manhattan. The Peninsula New York features 185 spacious guest rooms and 54 suites, including the recently unveiled Peninsula Suite, which at 3,300 sq ft is the hotel’s premier suite accommodation. The hotel’s luxurious Peninsula Spa was rated “#1 Hotel Spa in the US 2012” by the readers of Conde Nast Traveler in the June 2012 issue.

The “Celebrate With Us” promotion offers one complimentary bottle of The Peninsula Deutz Brut Classic Champagne, per stay to guests who book a room between October 18 – December 30, 2012. Guests must use the promotional code “CNT2012” online at http://www.peninsula.com/newyork. The offer is valid for room-only rates and cannot be combined with any other promotions. Terms and conditions apply. For more information, please call (212) 956 2888, toll-free (800) 262 9476 or email pny@peninsula.com.