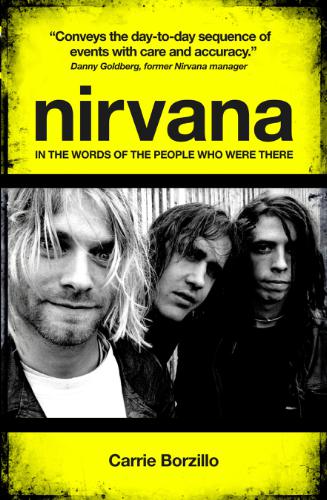 Signed copies of ‘Nirvana: In the Words of the People Who Were There’ By Carrie Borzillo will be donated to the American Foundation for Suicide Prevention

Carlton Books has announced the re-issue of author/journalist Carrie Borzillo’s first book, 2000’s Eyewitness Nirvana: The Day-by-Day Chronicle, with a new cover, title, and design as Nirvana: In The Words of the People Who Were There on April 1, 2014 to commemorate the 20(th) anniversary of the tragic death of Kurt Cobain.

The reissued book, which comes in a new 5.5 x 8-inch format, is available everywhere books are sold. Borzillo is also selling a limited number of signed copies direct to the fans via her official website, http://carrieborzillo.com/books.html for $35 (U.S.) and $45 (International). A percentage of each autographed book purchased direct from the author will be donated to the American Foundation for Suicide Prevention (www.afsp.org).

“We lost one of the greatest artists of our generation when Kurt Cobain took his life on April 5, 1994 and it’s a sadness that I still deeply feel today,” says Borzillo.

Nirvana: In The Words of the People Who Were There is as near as possible to a day-to-day account of every significant band event, from its inception right through Kurt Cobain’s early tragic death on April 5, 1994 in a timeline, oral history format.

Originally released in 2000 as Eyewitness Nirvana: The Day-by-Day Chronicle, the book’s been released in multiple formats and languages, including Italian, German, and Spanish. Other recent re-issues include the Spanish-language version, Kurt Cobain: La Historia de Nirvana, released on March 18, 2014, and Kurt Cobain: The Nirvana Years, released in October 2013.