In this historic edition to take place this August 31st, the event gets a new branding.

If the green-and-yellow mood lies deep within every Brazilian – including Brazilians by soul – then it will also be present at the 30th Brazilian Day, which from now on will be known as BR Day New York. The new branding celebrates the event’s historical edition and Globo’s 15 years in the international market as it brings visual unity to the street festivity.

In the press conference held recently in Manhattan was announced that BR Day will take place on August 31st featuring a crowd-pleasing line up and more surprises are yet to be announced.

This year, two major attractions will lead the limelight. Brazilian Country singer Daniel brings his very own rhythm to the event and shares the stage with special guest, Carlinhos Brown. The show will go on with Ivete Sangalo, who promises to shake up the city along with music guests Saulo Fernandes and Tiago Abravanel. 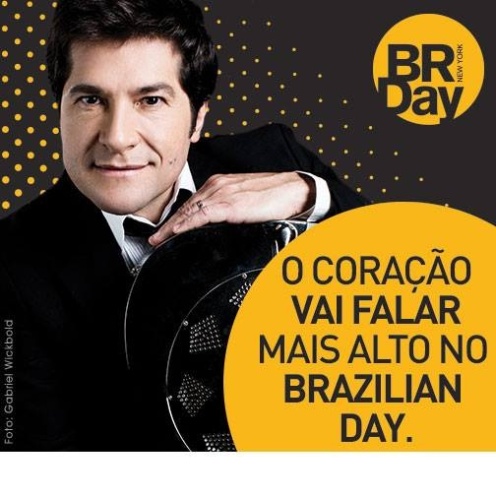 Actor Cauã Reymond, who has become internationally known for his success in Globo’s telenovela Avenida Brazil, will be the Host.

During the press conference, a video with messages from the talents announcing the lineup was presented to the journalists: “I am taking to New York my brand new show, which celebrates the 20 years of my career,” said Ivete Sangalo, renowned singer, who will once again lend her voice and personality to New York, and to the event.

Daniel can’t hide his enthusiasm: “We are going to show the world the cheerfulness of the Brazilian people”.
In recently attendance at the press conference, André Dias, Globo’s Special Projects Director, and João de Matos, the event’s President, showcased the BR Day’s new brand image. The anniversary edition of the event – which is considered to be one of the biggest Brazilian festivities outside Brazil – features a new brand image to reflect the vision of Globo TV.

The BR Day, produced by Joao de Matos, The Brasilians and TV Globo International is considered to be one of the biggest Brazilian celebration outside Brazil and this year was totally rebranded.
“As of this edition, we have now an even bigger role on BR Day. We also continue to rely on the expertise of João de Matos with the event’s production team, which he has been doing for so many years. BR Day is the celebration of the Brazilian culture,” said André.

“Our community plays a very important role in this the event. We have grown together with the Brazilian community in New York,” said João de Matos. Along with the tagline “The Green-and-yellow Mood”, the new brand celebrates Brazilians who every year travel from different parts of the US to witness the event. The Brazilian Day also salutes all Americans and those of all nationalities who relate to the Brazilian spirit and its blend of spices: the true Brazilians by soul. The first Brazilian Day was in 1984 on 46th Street, also known as “Little Brazil”, in remembrance of Brazil’s Independence Day. The festival grew in size each year and now stretches across Sixth Avenue from 42nd Street to Central Park.

The event, which has featured renowned artists such as Timbalada, Skank, Jorge Ben Jor, Lulu Santos, Marcelo D2, Alcione, Elba Ramalho, Zeca Pagodinho and others, promises to repeat its success in this historic edition.