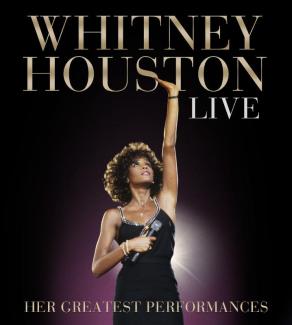 “Fans revere Whitney Houston’s studio recordings, but she scaled her greatest vocal peaks in live performance. If you never got to see her in concert, you ain’t heard nothin’ yet.  It’s Whitney Houston as you’ve never heard her before.  Five stars!”-NY DAILY NEWS

Whitney Houston Live: Her Greatest Performances, the six-time Grammy-award winning singer’s first-ever live album, has made impressive Billboard chart debuts today, entering at #1 on the Billboard R&B chart, #2 on the R&B/Hip Hop chart and #17 on the Top 200, following its release Nov. 10 release on Sony Legacy Recordings.   Available as a DVD and CD, the package features Houston’s most memorable live performances from her storied career, reinforcing her as one of the greatest vocalists of all time. Both the audio and visual content have undergone state of the art restoration and remastering and the package has earned glowing media acclaim as well.  USA TODAY called Houston “…The greatest pop-soul singer of her generation” and the LA TIMES said “…an exceptionally expressive song interpreter and a magnetic personality in concert.”  NEWSDAY stated that “Whitney Houston Live: Her Greatest Performances is the legendary performer at her best, singing live” and BET praised, “Whitney Houston was not only one of the greatest singers of all time, she was a legendary performer as well.”

Produced by five-time Grammy-award winner Clive Davis in cooperation with Pat Houston and the Whitney Houston Estate, Whitney Houston Live: Her Greatest Performances takes listeners through the remarkable arc of Houston’s career, from her national network television debut appearance on The Merv Griffin Show in 1983 as a prodigious teenager, where she sang “Home” from The Wiz, to her emotional 2009 performance of “I Didn’t Know My Own Strength” on The Oprah Winfrey Show.  The album has also made a significant impact with its digital sales, coming in with over 30% in digital sales, the first time Houston has achieved that.

With six Grammy Awards, two Emmy Awards, 16 Billboard Music Awards, 22 American Music Awards (to date the most AMAs ever won by a female performer), and 170 million albums, singles and videos sold worldwide, Whitney Houston was a true pop culture icon and Whitney Houston Live: Her Greatest Performances only further demonstrates her prodigious talent, which will keep her and her magic remembered forever.