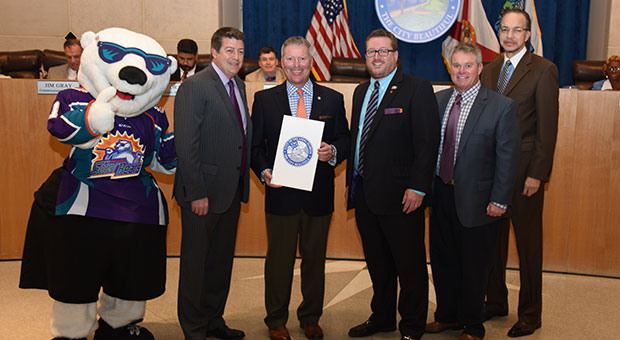 January 21, 2015, Declared “CCM/ECHL All-Star Classic Day”
The Orlando Solar Bears, proud affiliate of the NHL’s Toronto Maple Leafs and AHL’s Toronto Marlies, presented to the Orlando City Council on Monday, December 8, updating the council on the status of the 2015 CCM/ECHL All-Star Classic, presented by Visit Orlando, that will be played at the Amway Center on Wednesday, January 21, 2015

“We are thrilled to host the 2015 CCM/ECHL All-Star Classic in our Downtown,” said Orlando Mayor Buddy Dyer. “This event further cements Downtown as a  destination for sports and entertainment attracting thousands to the area and boosting our local community.”
The Solar Bears and the ECHL will also host a FanFest, presented by Walgreens, on Tuesday, January 20, 2015. Join us for an Outdoor Youth Hockey All-Star Game, player autograph stations, a Local 6 Virtual Studio, inflatable games, an appearance by Shades and the Solar Bears Dancers, and FanFest vendors and food trucks.

Full and Half Season tickets are on sale now for the 2014-15 All-Star Season. Call the Solar Bears at 407-951-8200 or visit OrlandoSolarBearsHockey.com for more information.

Group tickets are a great way to entertain employees, co-workers, clients, friends and family. For more information on discounted group tickets and a list of group benefits, call 407-951-8200 or visit http://www.orlandosolarbearshockey.com/groups.

Since beginning operations in November of 2011, the Solar Bears and their fans have helped raise over $900,000 for the Central Florida community. To read the Solar Bears Report to the Community, click here.