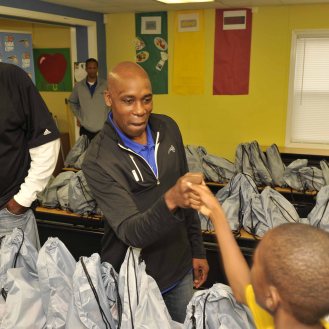 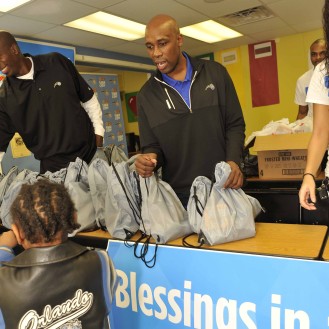 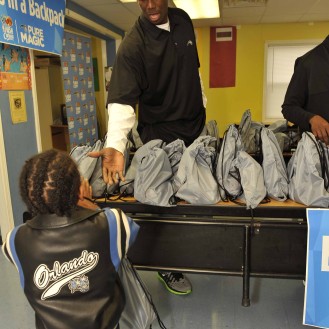 ORLANDO — By playing and coaching basketball nearly all of his life, Jacque Vaughn understands the importance of a healthy diet.

Good nutrition, in fact, played a key role in him lasting 12 years in the NBA as a player and he admits it remains essential as a head coach.

Therefore, helping children learn good nutritional habits and routines on Thursday as part of the Orlando Magic’s Blessings in a Backpack initiative meant a lot to Vaughn.

The Magic coach along with several other volunteers, including Community Ambassadors Nick Anderson and Bo Outlaw, stuffed backpacks with healthy snacks such as cereal, fruit and soup for students at the Nap Ford Community School. The idea is for kids to have enough food to last them throughout the weekend.

“The ability to have nutrition, basic needs over the weekend, there’s a lack of it and I’m glad we have a partnership where we can help provide some nutrition and food to those in need,” Vaughn said.

There are over 20 million children in the United States at risk of hunger. As a result, it’s imperative for a program like Blessings in a Backpack to continue assisting in hopes of diminishing the problem. Not only does hunger result in severe health issues but it also can negatively impact test scores and reading skills in school.

“There’s a relationship that’s built to the way your mind works, the way your body responds and having some basic essentials and needs to nourish yourself to push you through the day so you can accept learning, those are necessities,” Vaughn said.

“To be able to have a partner like the Magic who want to help build some foundational needs for the children helps us pave the way for us to focus on the academics,” said Jennifer Porter-Smith, executive director of the Nap Ford Community School.

Stopping childhood hunger and obesity is a major concentration for the Magic. In addition to participating in events like the one on Thursday, they also run the MAGIC Fit program. The program is placed in Central Florida schools where students are tested with a unique eight-week challenge created by the Magic’s Head Strength and Conditioning Coach, Bill Burgos.