Orlando, FL – The Orlando Solar Bears, proud affiliate of the NHL’s Toronto Maple Leafs and AHL’s Toronto Marlies, announced today that F Peter Sivak has been assigned by the Bridgeport Sound Tigers (AHL) to Orlando and D Yann Sauve has been loaned to the Springfield Falcons (AHL). 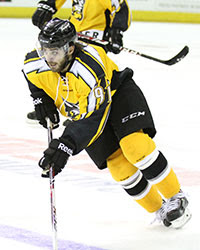 scoring 10 goals and adding 16 assists for 26 points. He has also skated in five games with Bridgeport, tallying one goal. Last season, Sivak helped the Alaska Aces capture the Kelly Cup and finished second in the ECHL in points (83) and assists (52) while ranking third in the league in goals (31). In 10 playoff contests with Alaska, Sivak scored five goals and added four assists. A native of Cheb, Czech Republic, Sivak played his first season in North America with the San Francisco Bulls (ECHL) in 2012-13 where he led his team in goals (33) and points (56) while finishing third on the team in assists (23).

Prior to coming to North America, Sivak played 11 seasons in Slovakia and the Czech Republic. He has skated in 479 games in Slovakia’s top-tier, posting 106 goals and 104 assists for 210 points. In 97 games in the top Czech division, Sivak has 22 points on four goals and 18 assists.

Sauve earns his second trip in the AHL after skating in four games for the St. John’s IceCaps, notching one goal. In 13 games with Orlando, Sauve has four points (2 goals, 2 assists) and 19 PIM.

Full and Half Season tickets are on sale now for the 2014-15 All-Star Season. Call the Solar Bears at 407-951-8200 or visitOrlandoSolarBearsHockey.com for more information.