The Orlando Magic Youth Fund, a McCormick Foundation Fund, Makes a Difference in the Community through 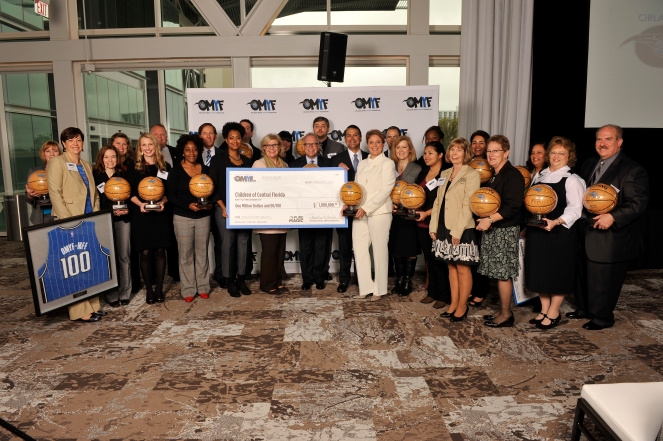 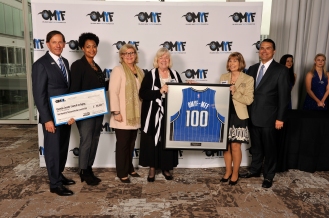 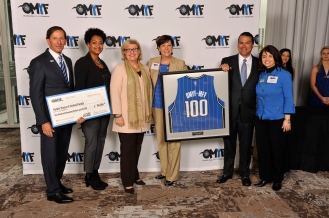 ORLANDO – With a toothy smile splashed across his face and both fists already pumping, Dr. John Gyllin let out a euphoric “Woo Hoo!!!” on Thursday upon hearing the good fortune that the Orlando Magic Youth Fund, a McCormick Foundation Fund (OMYF-MFF), were bestowing on the Foundation for Seminole State College.

The moment was especially emotional for Dr. Gyllin because he knew full well how many lives could be changed by the $50,000 grant that the Orlando Magic Youth Fund awarded to Seminole State. The money will be used for the “Molding Another Generation in College Program Fund” so that many first-generation college students have the support services needed to be successful in trying to better their lives.

“This financial support from the Magic helps so many first-generational students who otherwise may not have the financial resources to go to school, but also the support needed to be successful and get into that job that they want,” said Dr. Gyllin, the executive director for the Foundation for Seminole State College. “That’s what makes today so important. Without this funding from the Magic and these resources, lots and lots of students wouldn’t have the support to make it through college. The Magic see the impact that this has and we’re so happy to partner with them on this venture.”

Dr. Gyllin’s emotion was shared by 21 Central Florida organizations that received $1 million in grants on Thursday from the Orlando Magic Youth Fund, a McCormick Foundation Fund. In a ceremony held at the Dr. Phillips Center for the Performing Arts, the OMYF-MFF All-Star team was announced much like the NBA Draft with each nonprofit organization being recognized and presented with an OMYF-MFF jersey or specialty basketball. Representatives were greeted by Orlando Magic Chairman Dan DeVos, Magic CEO Alex Martins, Magic Vice President of Philanthropy and Multicultural Insights and OMYF President Linda Landman Gonzalez and the OMYF team.

“Our mission is to be World Champions on and off the court delivering legendary moments every step of the way. And today truly is a legendary day,” Martins said. “This truly is my favorite day of the year because we know that we are making a significant impact in Central Florida with the funds that we distribute to these very worthy organizations.”

In the past five years, OMYF-MFF has granted nearly $5 million to various organizations throughout Central Florida. In the past 25 years, more than $19.8 million has been distributed to local nonprofit community organizations through the Orlando Magic Youth Foundation and the Orlando Magic Youth Fund, a McCormick Foundation Fund (OMYF-MFF) since 1994 to some 500 nonprofit organizations – funding that has impacted more than 2 million children and people in need. That philosophy of giving falls in line with the vision of legendary owner Rich DeVos, who has stated through the years that it was always his hope to use the Magic as a vehicle to assist others and make a difference in the community.

“One of fundamentals of my parents and my family is us giving back with your time, treasure or whatever you have,” Magic Chairman Dan DeVos said. “Everybody needs to give a little bit back because we all benefit so much from this community. This is a very exciting time for us. The excitement of the individuals here is real because they all know the difference this makes on the community and their organizations.”

The $1 million in funds given to the Central Florida nonprofit organizations is raised by the Orlando Magic Youth Foundation, and the match provided by the Robert R. McCormick Foundation. After an extensive five-phase process, which began in April of 2014, the beneficiaries were recommended by the OMYF Board and then approved by the McCormick Foundation’s Board of Directors.

Scott Bowman, the board chairman for the Zebra Coalition of the Aspire Health Partners, said the Magic’s commitment to the community shows that they are far more than simply a basketball team. They care about the people in Central Florida and are serious about making it a better place to live, Bowman said.

“The Magic have always been one of the top organizations in the entire community because they really do help so many people on and off the court,” Bowman said. “They help so many organizations who make a difference here. And at the end of the day, the Magic improve the quality of life in this community and that’s what it’s really all about for them.”

Osceola Council on Aging CEO Beverly Hougland had tears in her eyes and seemed to get emotional when it was announced on Thursday that her organization would be receiving $100,000 for its “Building Strong Families” program. It provides a comprehensive menu of emergency and preventative services to address families in crisis. Some of the much-needed assistance includes case management, rent and utilities aid, food, childcare referrals, employment training, education and public health benefits.

Hougland shudders to think where her organization – and more importantly those citizens most in need – would be without the generous help of the Orlando Magic Youth Fund (OMYF-MFF).

“This is a very emotional moment for me because you know what you are going to do with the money and you can almost see the people in need who you are going to help,” Hougland said. “Without this funding, it would really hurt a lot of people, so I do get really emotional about it.

“We’re bombarded by need from everything such as healthcare, to housing, to helping to build strong families,” Hougland continued. “We have a holistic approach to helping people be independent and self-sufficient. So we know what this money does for a lot of people who really need it. The Magic are fabulous and they really show us every day that they are a part of this community. That means a lot to all of us who live and work here.”