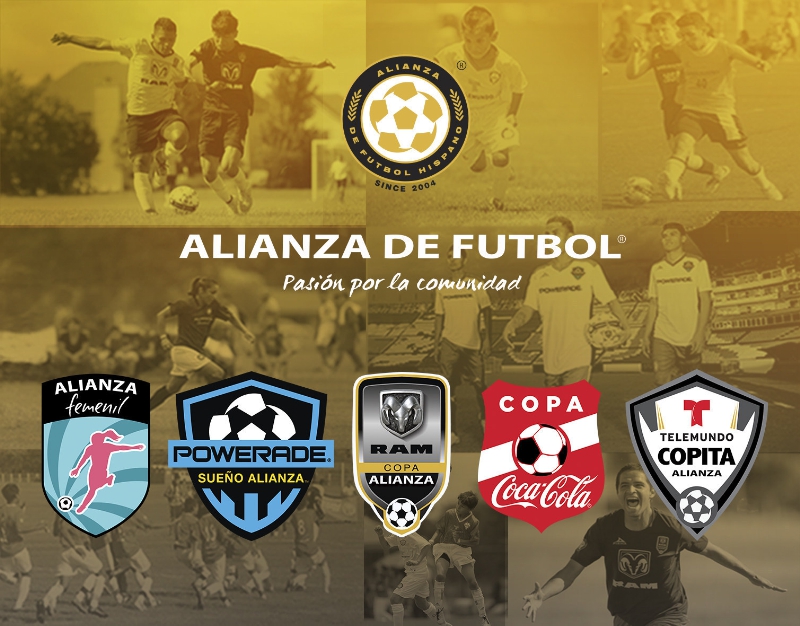 Alianza de Futbol Hispano kicks off its 12(th) season on April 25th in Phoenix with the first of its 2015 soccer events that will tour 11 U.S. cities and feature more than 30,000 players.

POWERADE® Sueno Alianza annually exposes 5,000-plus teens from more than 40 states to professional clubs and national team programs. Scouts from Liga MX, Major League Soccer, and the national team programs of Mexico, Colombia and the USA are expected to attend. Of the players who have attended this cost-free program, now in its eighth year, more than 50 have turned pro and more than 20 have been called into youth national teams. Most recently, Alianza alumni Dennis Flores and Julio Morales received invitations from Coach Jurgen Klinsmann to this year’s first U.S. National Team Camp, while 2014 Alianza alumni Edwin Lara is on the path to representing Mexico at the U-17 World Cup.

RAM® Copa Alianza, the most prestigious and longest running Hispanic adult tournament in the country, will feature more than 5,000 players. It will offer more than $100,000 in prizes including RAM® uniforms to the top 8 teams in each of the 10 host cities during what will be its 12(th) season.

As a sponsor of the program for the second consecutive year, Allstate® will award the most outstanding goalkeeper of the RAM® Copa Alianza and POWERADE® Sueno Alianza programs with the prestigious Allstate Golden Glove Award.

Alianza is proud to announce that beginning in 2015, Copa Coca-Cola® will be part of the Alianza family of programs, bringing another great futbol experience to 13 and 14-year-old teens and their families. Copa Coca-Cola®, the world’s largest grassroots football program, champions an active healthy lifestyle and encourages values such as team spirit, friendship and respect. The tournament has been played in more than 60 nations around the world and over 1.3 million players have participated. The U.S. edition will run in all 11 cities where Alianza events will take place.

We are excited to announce that Telemundo® will be the new title sponsor of Telemundo® Copita Alianza, the USA’s largest Hispanic youth tournament in its 7(th) successful year with more than 20,000 players competing in 11 cities.

Finally, Alianza is excited to announce the launch of Alianza Femenil, the nation’s first Hispanic female tournament. More than 3,200 players are expected to compete in U-18 and open-age divisions.

As a complement to our tournaments, Alianza U, a college-recruiting platform, is designed to help Hispanic players from Alianza de Futbol to better understand the college recruiting process.

As always, Alianza events will feature appearances from some of the most legendary stars this side of the hemisphere. The program’s ambassadors include former Mexico standouts Rafael Marquez, Jorge Campos, Claudio Suarez, Luis Garcia, Ramon Ramirez, and the Colombian legend, Carlos “El Pibe” Valderrama.