PRINCETON, N.J. – The ECHL announced on Wednesday the winner for each of the 21 teams participating in the 2014-15 ECHL Fantasy Team, presented by The MeiGray Group, as well as the goaltenders who will be participating for each of the League’s 28 teams in the Golden Goalie Program. Jacob Cepis was named the

Orlando Solar Bears representative on the Fantasy Team and Garret Sparks was selected to participate as the Golden Goalie. Both players will wear their special jerseys on Thursday, March 5, at 7:00 p.m. against the Cincinnati Cyclones.

Fans had the opportunity to vote on ECHL.com for one player on each ECHL member team’s ballot to help select the 2014-15 Fantasy Team. The winning player will wear a special ECHL Fantasy Team jersey at an upcoming home game.

Both the Fantasy Team skater and the Golden Goalie will wear a specially-designed jersey on the designated date. Dates are subject to change based on player availability. 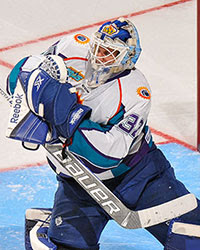 Each of the Fantasy Team skater and MeiGray goaltender jerseys will be available for bid through The MeiGray Group.

Jerseys will be available for bid starting on Tuesday, March 17

The schedule of teams, as well as the winning skater and the participating goaltender, is available onECHL.com. In the event that the winner for a team is unable to play in the preselected game, the second-place vote-getter from that team will wear the special jersey.