Orlando, FL – The Orlando Solar Bears, proud affiliate of the NHL’s Toronto Maple Leafs and AHL’s Toronto Marlies, announced that they have acquired G Joe Howe from the Rapid City Rush in exchange for future considerations. 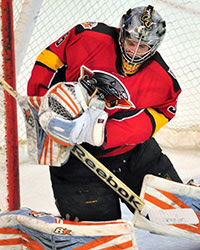 Full and Half Season tickets are on sale now for the 2014-15 All-Star Season. Call the Solar Bears at 407-951-8200 or visitOrlandoSolarBearsHockey.com for more information.