Orlando, FL – The Orlando Solar Bears, proud affiliate of the NHL’s Toronto Maple Leafs and AHL’s Toronto Marlies, announced that they have acquired F Akim Aliu from the Bakersfield Condors in exchange for future considerations. 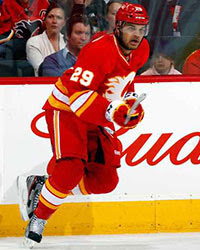 Aliu (6-4, 225 lbs.) was drafted in the second round (#56 overall) by the Chicago Blackhawks in the 2007 NHL Entry Draft. He has appeared in seven games in the NHL for the Calgary Flames (2011-12 and 2012-13), scoring two goals and adding one assist for three points to go along with 26 PIM. This season, Aliu has four points (3 goals, 1 assist) and 51 PIM in 10 games with the Rochester Americans (AHL) and nine points (2 goals, 7 assists) in 15 games with the Condors. He has also appeared in one game for the Oklahoma City Barons (AHL). Aliu has played in 54 games in the ECHL with Bakersfield, Colorado, Gwinnett, and Toledo, posting 49 points on 21 goals and 28 assists to go along with 92 PIM. In 232 AHL games with Oklahoma City, Rochester, Hartford, Abbotsford, Chicago, and Rockford, Aliu has 404 PIM and has scored 71 points on 44 goals and 27 assists.

Prior to joining the professional ranks, the Okene, Nigeria, native played four seasons in the OHL (Ontario Hockey League), collecting 76 goals and 91 assists for 167 points and 407 PIM. Aliu had his best offensive season with the London Knights in 2007-08, finishing third on the team in goals (28), assists (33), and points (61) while leading London in PIM (133).

Follow the Solar Bears at www.OrlandoSolarBearsHockey.com, Facebook, and Twitter(@OrlandoHockey) for all the latest news and updates. Stay in touch with Shades on Instagram by following ShadestheSolarBear.